DSGE models are popular in macroeconomics and finance to model multiple time series. The models contain systems of linear or nonlinear equations that describe various economic processes. The parameters of DSGE models typically have direct interpretation in the context of economic theory and often have established ranges of plausible values. These ranges (or constraints) should be incorporated in the estimation to obtain stable results.

Bayesian estimation provides a natural way to incorporate such constraints by specifying various prior distributions for model parameters that satisfy the constraints.

A DSGE model consists of a system of equations that relate economic variables, like inflation, the interest rate, and the output gap, to each other and to exogenous state variables that drive the system. Equations can be dynamic in two senses: lags capture backward-looking behavior, while expected future values capture forward-looking behavior. DSGE models can be used to analyze policies, like the effect of monetary shocks, fiscal shocks, etc.

The unobserved option in the IS curve indicates that we treat the output gap as unobserved. We fit the model to data on inflation and the interest rate.

We add a prior specification for each parameter. Many DSGE parameters have interpretations that naturally restrict the range of admissible values. Parameter {beta} in the Phillips curve is a discount rate and must lie between 0 and 1. Parameter {kappa} is a price adjustment parameter, often thought to be small but positive. Parameter {delta} is the inverse of the Taylor rule inflation adjustment coefficient, so it must lie between 0 and 1. In addition to these range restrictions, one might have priors on the probable location of the parameter value. The discount rate is probably around 0.95, the inflation adjustment parameter around 0.2, and the inverse inflation adjustment coefficient around 0.66 (for a Taylor rule coefficient of 1.5). Priors allow you to incorporate that information explicitly in estimation.

Consider the data on the inflation rate and federal funds rate since 1955. 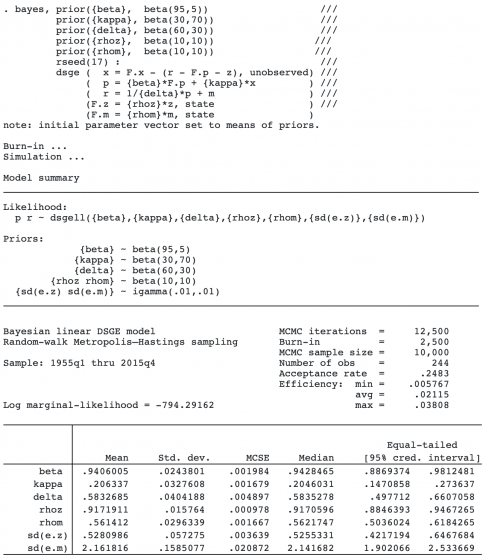 The model summary shows the likelihood model and the prior specifications. The priors for all but the standard deviations are required. In the case of DSGE models, this makes sense because parameters are related to economic theory. For example, the prior for the discount factor {beta} is beta with shape parameters 95 and 5. The standard deviations of the shocks to the state variables z and m were assigned default inverse gamma priors.

The estimation output displays the number of burn-in periods (2,500), the MCMC sample size (10,000), the sample size of the data (244 periods), the sample period (1955q1 through 2015q4), and the acceptance rate and efficiency of the estimation process. The acceptance rate refers to the fraction of MCMC draws that was accepted. Typical values for the Metropolis–Hastings sampler used are 20% to 30%; our acceptance rate is 24%. Efficiency is related to the autocorrelation of the MCMC draws and indicates how quickly the sampler traverses the parameter space. Our average efficiency is 2.1%.

All of Stata’s Bayesian postestimation features work after bayes: dsge.

We can plot the posterior density of the prior adjustment parameter {kappa}.

We can plot a full set of diagnostics for {kappa}.

The posterior mean for 1/{delta} is 1.7, higher than the prior mean of 1.5 and indicating a strong response of interest rates to changes in inflation.

With the MCMC sample saved, we can construct impulse–response functions with the bayesirf suite. This suite of commands extends irf to accommodate Bayesian estimation and is available after bayes: dsge, bayes: dsgenl, and bayes: var.

All this and more can be performed with the bayes: dsge command.

The bayes prefix also works with the dsgenl command, which estimates the parameters of nonlinear DSGE models by first-order perturbation.

Next we estimate the parameters of a stochastic growth model. The model has equations for consumption, the real interest rate, GDP, the capital stock, and productivity.

We estimate the parameters of this model using detrended output. The m1gdp.dta dataset provides the logarithm of output.

The tsfilter command extracts the trend component of output. We use a Hodrick–Prescott filter and then scale the result up by a factor of 100. The resulting scale is such that a value of 1 indicates that GDP is 1% above its trend value.

We proceed with parameter estimation. 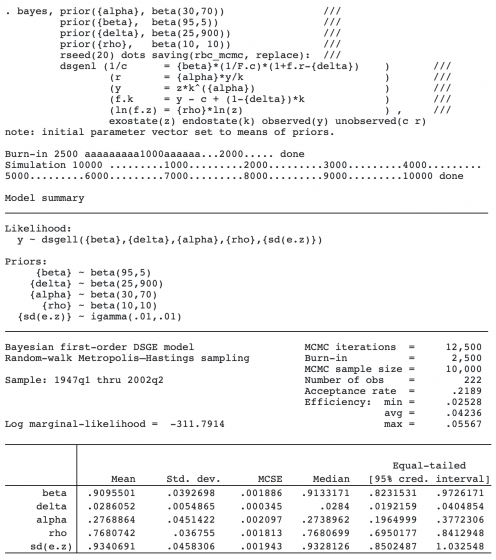 We next compute impulse–response functions to a technology shock.

Exact posterior means and credible intervals can be viewed with bayesirf table. Below, we tabulate the response of consumption to a technology shock. 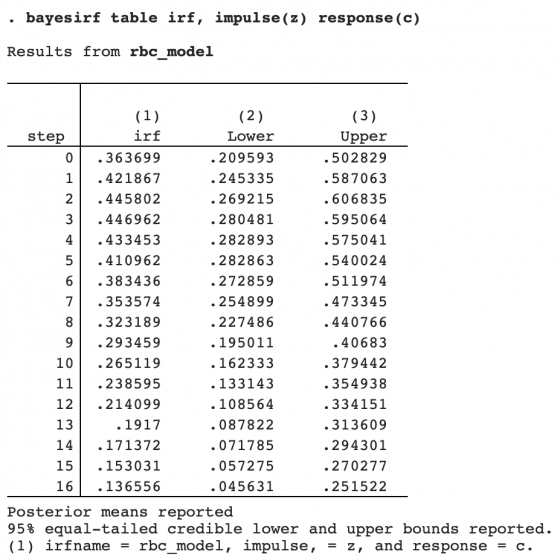 After a one-standard-deviation technology shock, consumption rises and peaks at 0.447% above its steady-state value in the third period after the shock.