Ordered logit regression is used to model ordered categorical responses, such as symptom severity recorded as none, mild, moderate, or severe. Larger values of such ordered outcomes represent higher levels, but the numeric value is irrelevant.

In some situations, more zeros (or more values in the lowest category) are observed in the data than would be expected by a traditional ordered logit model. A zero might represent the absence of a trait, while the remaining values represent increasing levels of the trait. Many zeros may be observed, some because the individual does not have the trait and some because an individual has the trait but exhibits the lowest level. For example:

In contexts such as these, you can use a zero-inflated ordered logit (ZIOL) model. ZIOL models assume that the lowest-valued outcomes come from both a logit model and an ordered logit model, allowing different sets of predictors for each model.

More than half the respondents reported zero cigarette consumption. A zero may be reported for two reasons—because a respondent is always a nonsmoker or because a respondent is susceptible to smoking but did not smoke in the time period for which the data were collected. A traditional ordered logit model cannot distinguish between the two causes of zero cigarette consumption. The ZIOL model allows us to model the probability of being susceptible to smoking in addition to modeling level of consumption. 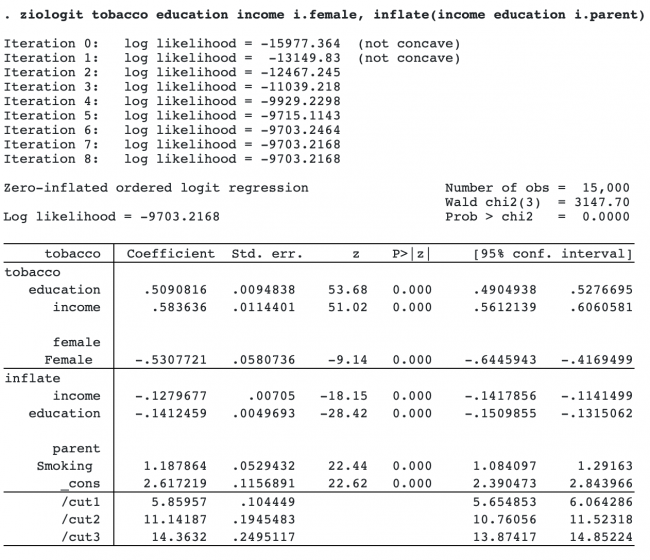 To more easily interpret the results from the first two sections, we request that ziologit show odds ratios rather than coefficients. 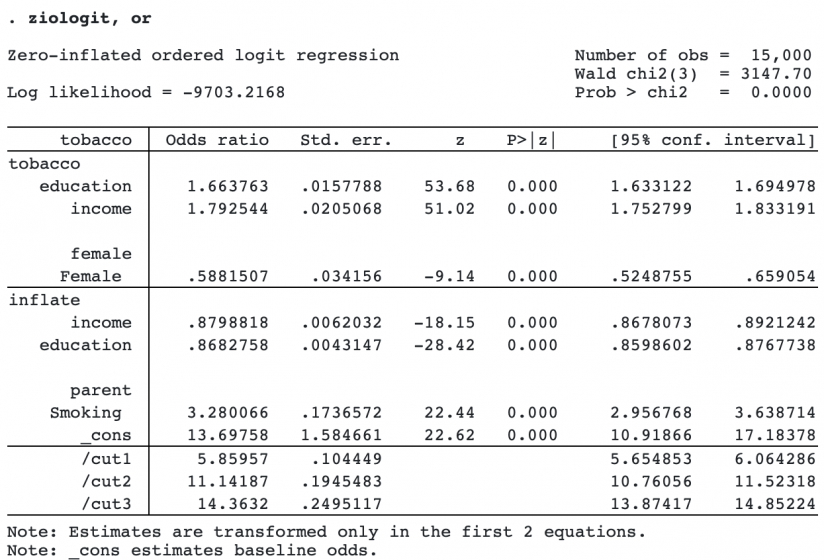 But what do these results mean in terms of the probability of exhibiting different smoking behavior? Suppose we want to know the relationship of cigarette consumption to income level. For that, we use the margins command. For annual incomes of $0, $50,000, $100,000, $150,00, and $200,000, we estimate the expected probabilities of each cigarette consumption level. 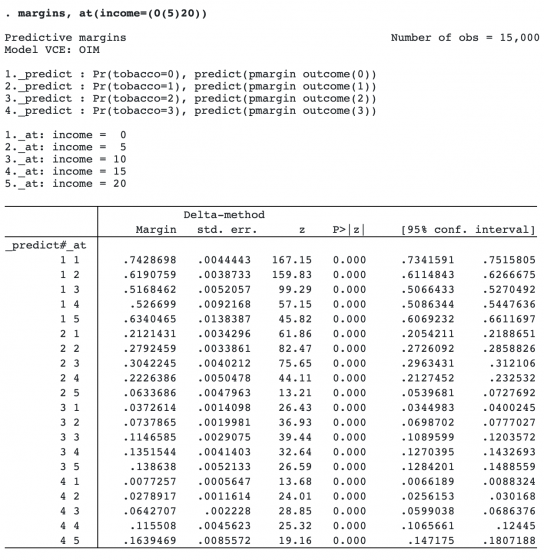 We estimated many expected probabilities. It is helpful to visualize the results by using marginsplot. 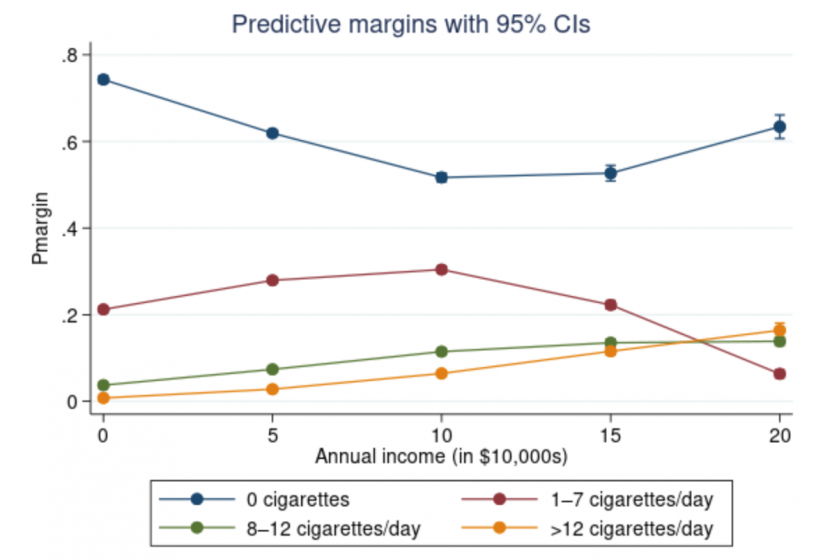 We now want to examine the relationship between income and the susceptibility to smoking. We add the predict(ps) option to margins to request the estimates of predicted probability of susceptibility.

Next we use margins to focus on subjects who are susceptible to smoking. By specifying statistic pcond1 along with each outcome level, we calculate the probability of each level of tobacco, conditional on susceptibility. As before, calculations are performed at five levels of income and graphed with marginsplot.

When annual income is zero, well over half of those susceptible to smoking report zero cigarette consumption, and those who do consume cigarettes are most likely to smoke just a few cigarettes per day. As income increases, the probability of zero consumption falls. Higher annual income is associated with a higher probability of being a heavy smoker. This suggests that, among smokers, cigarettes are treated as what economists call a normal good, that is, something for which demand increases when income increases.

We can see from this example that the effect of income on cigarette consumption is multifaceted. The ziologit command makes it possible to model smoking susceptibility as well as smoking intensity, leading to a better understanding of the factors influencing smoking behavior.