Meta-analysis combines the results of multiple studies that answer similar research questions. Does exercise prolong life? Does lack of sleep increase the risk of cancer? Does daylight saving save energy? And more. Many studies attempt to answer such questions, and some report inconclusive or even conflicting results. Meta-analysis helps aggregate the information, often overwhelming, from many studies in a principled way into one unified final conclusion or provides the reason why such a conclusion cannot be reached.

Stata has a long history of meta-analysis methods contributed by Stata researchers, for instance, Palmer and Sterne (2016). Stata now offers the new suite of commands, meta, to perform meta-analysis. The new suite is broad, yet one of its strengths is its simplicity.

Let’s quickly look at one possible workflow. Also see the summary of all features in Summary of features in four tables and more examples in Let’s see it work.

Tell meta that effect sizes and their standard errors are already stored in variables such as es and se,

or that you have binary summary data and want to compute, for instance, log odds-ratios,

or that you have continuous summary data and want to compute, for instance, Hedges’s gstandardized mean differences,

Or produce a forest plot:

Check whether funnel-plot asymmetry is due to publication bias using a contour-enhanced funnel plot:

Also see the summary of all features in Summary of features in four tables. For more examples, see Let’s see it work.

Summary of features in four tables 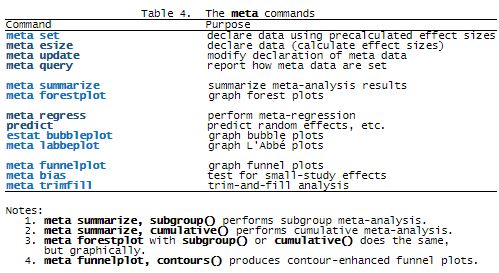 To demonstrate the meta suite, we use the famous example from Raudenbush (1984) of the meta-analysis of 19 studies that evaluated the effects of teacher expectancy on pupil IQ. In their original study, Rosenthal and Jacobson (1968) discovered the so-called Pygmalion effect, in which expectations of teachers affected outcomes of their students.

The goal of the experiment was to investigate whether the identification of the randomly selected group of students (experimental group) to teachers as “likely to show dramatic intellectual growth” would influence teachers’ expectations for these students. The authors found a statistically significant effect between the experimental and control groups with respect to students’ IQ scores.

Later studies attempted to replicate the results, but many did not find the hypothesized effect. Raudenbush (1984) suspected that the Pygmalion effect might be mitigated by how long the teachers had worked with the students before the experiment.

See Example datasets in [META] meta for details about this example.

We load the dataset and describe some of its variables below.

stdmdiff and se record precomputed effect sizes, standardized mean differences between the experimental and control groups, and their standard errors.

studylbl contains study labels, which include the authors and publication years.

Declaring the meta-analysis data is the first step of your meta-analysis in Stata. During this step, you specify the main information needed for meta-analysis such as the study-specific effect sizes and their standard errors. You declare this information once by using either meta set or meta esize, and it is then used by all meta commands. The declaration step helps minimize potential mistakes and typing; see [META] meta data for details.

Let’s declare our pupil IQ data. Our dataset contains already calculated effect sizes (stdmdiff) and their standard errors (se), so we use meta set for declaration. If you have study-specific summary data and want to compute effect sizes, see meta esize.

We also specified how we want the meta commands to label studies and effect sizes in the output.

In addition to our specifications, meta set reported other settings that will be used by meta by default such as those for the meta-analysis model and method. meta‘s default is a random-effects model with the REML estimation method, but you can specify any other of the supported methods; see Declaring a meta-analysis model. Also see [META] meta data for more information about how to declare the meta-analysis data.

After the declaration, you can use meta query or meta update to describe or update your current meta settings at any point of your meta-analysis.

After the declaration, you can use any of the meta commands to perform meta-analysis.

For instance, we can use meta summarize to obtain basic meta-analysis summary results and display them in a table:

Or we can use meta forestplot to produce results on a forest plot:

Both commands include the information about study-specific effect sizes and their CIs, in addition to the estimate of the overall effect size and its CI. For instance, from the plot, the estimated overall standardized mean difference is 0.08 with a 95% CI of [-0.02, 0.18].

Various heterogeneity measures and tests are also reported; we explore them below in Heterogeneity.

In meta-analysis, heterogeneity occurs when variation between the study effect sizes cannot be explained by sampling variability alone. meta summarizeand meta forestplot report basic heterogeneity measures and the homogeneity test to assess the presence of heterogeneity.

Consider the forest plot we produced in Meta-analysis summary.

The test of homogeneity of study-specific effect sizes is also rejected, with a chi-squared test statistic of 35.83 and a p-value of 0.01.

Subgroup analysis is used when study effect sizes are expected to be more homogeneous within certain groups. The grouping variables can be specified in option subgroup() supported by meta summarize and meta forestplot.

In Summary measures and homogeneity test, we established the presence of heterogeneity between the study results. As we said in Example dataset: Effects of teacher expectancy on pupil IQ, it was suspected that the amount of contact between the teachers and students before the experiment may explain some of the between-study variability.

Let’s first consider the binary variable week1 that divides the studies into the high-contact (week1=1) and low-contact (week1=0) groups. (Below Meta-regression, we explore the impact of continuous weeks on the effect sizes.)

For categorical variables, we can perform subgroup analysis—separate meta-analysis for each group—to explore heterogeneity between the groups.

Option subgroup() can be used with meta forestplot and meta summarize to perform subgroup analysis. In our example, we specified only one grouping variable, week1, but you can include more, provided you have a sufficient number of studies per group.

After stratifying on the contact group, the results appear to be more homogeneous, particularly within the high-contact group (> 1 week). The test of no differences between the groups, reported at the bottom of the graph, is rejected with a chi-squared test statistic of 14.77 and a p-value less than 0.01.

Meta-regression is often used to explore heterogeneity induced by the relationship between moderators and study effect sizes. Moderators may include a mixture of continuous and categorical variables. In Stata, you perform meta-regression by using meta regress.

Continuing with our heterogeneity analysis, let’s use meta-regression to explore the relationship between study-specific effect sizes and the amount of prior teacher–student contact (weeks).

After accounting for weeks, we find that the remaining between-study residual heterogeneity is roughly 30%.

Continuing with Meta-regression, we can produce a bubble plot after meta-regression with one continuous covariate to explore the relationship between the effect sizes and the covariate.

The standardized mean difference decreases as the number of weeks of prior teacher–student contact increases. There are also several outlying studies in the region where weeks is less than roughly 3 weeks. The size of the bubbles represents the precision of the studies. Some of the outlying studies also appear to be among the more precise studies.

Publication bias arises when the decision of whether to publish a study’s results depends on the significance of the obtained results. Often, smaller studies with nonsignificant findings are suppressed from publication. This may lead to a biased sample of studies in a meta-analysis, which is often collected from the published studies.

The meta suite provides three commands you can use to explore small-study effects and publication bias.

meta funnelplot produces standard and contour-enhanced funnel plots, which can be used to explore small-study effects and publication bias visually.

We demonstrate these commands in what follows.

To demonstrate, let’s produce a funnel plot for the pupil IQ data.

In the absence of publication bias and, more generally, small-study effects, the funnel plot should resemble a symmetric inverted funnel. In our example, it appears that a few points (studies) are missing in the lower left portion of the funnel plot, which makes it look asymmetric.

Recall, however, that in our earlier heterogeneity analysis, we established the presence of between-study variability. Thus, this may be one of the reasons for the asymmetry of the funnel plot.

Contour-enhanced funnel plots are often used to explore whether the funnel-plot asymmetry is due to publication bias or perhaps some other factors. Let’s add the 1%, 5%, and 10% significance contours to our funnel plot.

In fact, the meta-analysis literature recommends that the heterogeneity be addressed before the exploration of the publication bias. For instance, in our example, we can produce funnel plots separately for each contact group.

Continuing with Standard and contour-enhanced funnel plots, we can use one of the statistical tests to test formally for the funnel-plot asymmetry. These are also known as tests for small-study effects.

Let’s use the Egger regression-based test to test for the funnel-plot asymmetry in the pupil IQ data.

The null hypothesis of no small-study effects or, equivalently, of the symmetry of the funnel plot is rejected at the 5% significance level with a z statistic of 2.53 and a p-value of 0.0115.

But, if we account for the between-study heterogeneity due to week1, the results of the test are no longer statistically significant.

In the presence of publication bias, it is useful to explore its impact on the meta-analysis results. One way to do this is to perform trim-and-fill analysis.

meta trimfill estimated the number of studies missing presumably due to publication bias to be 3, imputed the omitted studies, and reported additional results using both the observed and imputed studies. With the imputed studies, the overall effect-size estimate is reduced from 0.084 to 0.028 with a wider 95% CI.

Given the presence of heterogeneity, however, we should have addressed it first before the trim-and-fill analysis. For instance, we could have run meta trimfill separately for low-contact and high-contact groups.

In Meta-regression, we established that there is a negative association between the magnitudes of effect sizes and the amount of prior teacher–student contact (weeks). We can perform cumulative meta-analysis to explore the trend in the effect sizes as a function of weeks. We display the results as a forest plot.

We specified weeks in meta forestplot‘s option cumulative() to perform cumulative meta-analysis with weeks as the ordering variable. This option is also supported by meta summarize.

As the number of weeks increases, the overall standardized mean difference and its significance (p-value) decreases.