Connect your GAUSS analytics directly into almost any production environment or data source.

Directly deploy your GAUSS project in enterprise, desktop or web-applications.

Fast: Share data 100x faster than over the network with native language bindings.

Accessible: Interface with any client or language which supports HTTP, such as JavaScript.

Accessible: Run GAUSS analytics and receive results from anything with a network connection.

WHY THE GAUSS ENGINE?

The core of GAUSS is written almost entirely in C. This allows GAUSS to be light-weight enough to be run on small devices, or run thousands of concurrent sessions on a small web server. Conversely, it also allows GAUSS to harness all the computing power of a large cluster.

The GAUSS Engine allows you to create independent workspaces like separate copies of the GAUSS platform, which can be quickly created and destroyed on demand. Your main program can communicate with these workspaces; they can run the same analysis on different data, or each run something completely different. Since even a modest server can create thousands of GAUSS Workspaces almost instantaneously, the GAUSS Engine can easily scale with your demand.

Create your algorithm once in the GAUSS Engine and re-use it on any platform GAUSS supports. No wasted time reworking for different platforms.

Pass in-memory data to and from the GAUSS Engine.

Ability to compile GAUSS code locates many errors right away and protects your intellectual property.

Distribute stand-alone applications which can be run on machines without the GAUSS platform installed.

More than 1000 standard built-in functions for data analysis, including many native and ODBC database drivers.

The native code of the GAUSS Engine has minimal dependencies, which allow it to run on many platforms and to easily interface with:

No matter what applications and data sources your organization uses, the GAUSS Engine can be integrated into your system.

The base version of the GAUSS Engine comes with more than 1000 mathematical and statistical functions. Pre-built, customizable modules are also available for specific applications, such as constrained optimization, Bayesian estimation, discrete choice modelling, machine learning and time series. The GAUSS Engine can also call functions from other libraries written in C/C++, or Fortran.

WHAT COMES WITH THE GAUSS ENGINE? 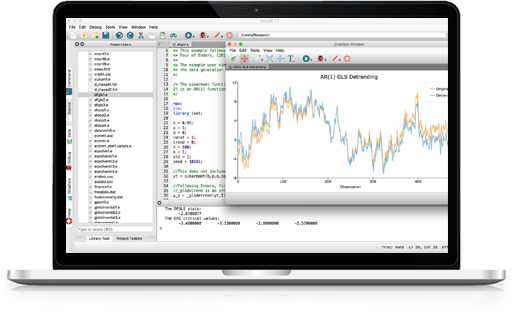 The full GAUSS mathematical and statistical platform for easy creation and debugging of your data analysis.

The GAUSS Engine shared library which you use to distribute the power of the GAUSS platform.

A full set of examples and documentation.