ERMs were added last release to Stata. They fit models with problems.

By problems, we mean any combination of endogenous and exogenous sample selection, endogenous covariates (unobserved confounders), and nonrandom treatment assignment.

New this release is that ERMs handle yet another problem—panel data (also known as longitudinal data or two-level multilevel data).

The problems that ERMs handle go by different names in different disciplines. Here is a list of the synonyms.

Outcomes missing not at random (MNAR)

Bias due to unmeasured confounding

You should be interested in ERMs’ new features if you fit cross-sectional time-series models, two-level multilevel models, or panel-data models.

Say you are interested in modeling wages and have repeated observations on individuals over the years 2011–2018. You might model their wages as a linear function of age, age squared, and education. There are two traditional ways you could fit this model in Stata:

meglm is Stata’s command for handling multilevel and hierarchical data.

Or you could fit the model with Stata’s new ERMs xteregress command:

All will produce equivalent results, and all will incorporate individual heterogeneity, a.k.a. random effects. It does not matter which command you use if your data are as we have described them.

If, however, your data suffer from any of the problems we listed above, you need to use xteregress. We say problems with your data, but whether the problems are specific to your data or a feature of reality makes no difference when it comes to fitting the model. The sources of the problems — they can vary problem by problem — matter for how you interpret and test the results. Another feature of ERMs is that they provide the tools you need for interpretation.

Consider panel data and the model

To show you how easy ERMs are to use, we are going to sequentially introduce problems and solve them. By solve, we mean that we will obtain estimates that any of the above commands would have produced if only the data did not have the problems we are about to add.

What we did was move ed from the list of exogenous variables before the comma and into the endogenous() option. ed will still be included in the model for wage but as an endogenous variable. Its reported coefficient will be adjusted for the confounding or endogeneity, just as if the data did not have the problem.

You observe wages in your data only for those who work. What if those who do not work would have a wage that was systematically higher or lower? It could go either way. People with higher wages would find working more enticing. On the other hand, people with lower wages will have a greater need to work. You decide to model whether a person works as a function of age, education, and minimum wage so that the bias, whichever way it goes, can be washed away.

And this second problem was solved even though education affects the choice to work and is itself endogenous!

Some people in the data belong to unions. Union effects on wages and membership might not be random. If it is not, we have endogenous treatment assignment. Assume that. The solution would be to model union membership.

We will stop now. We have only scratched the surface of what ERMs can do.

Here is the second one: 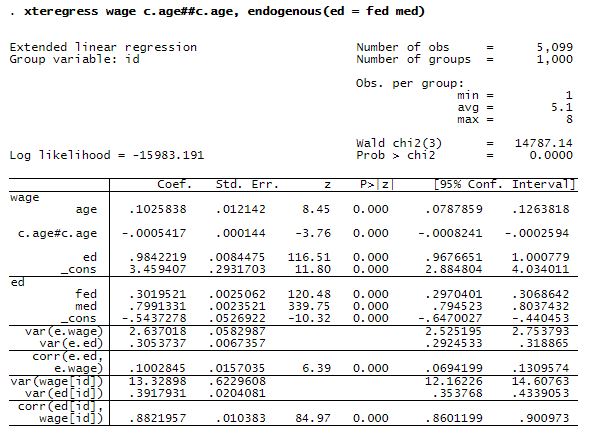 here are six sections in the above output.

wage. This section shows the wage equation. Here, ed is washed of its endogeneity.

ed. This section shows the ed equation used to wash ed of its endogeneity.

The remaining sections present information about the residuals and random effects. So let’s tell you how to read the encoded names.

e.wage and e.ed are the overall residuals. They vary over time and by person.

The random effects wage[id] and ed[id] are residuals too, but they are a different kind of residual. They vary across persons, but are constant within persons. That is why they include the subscript [id]. id is the person identification number.

We wondered whether education was endogenous. Were we right to worry? corr(e.ed,e.wage) and corr(ed[id],wage[id]) can answer that question. Correlation in either is endogeneity but of different kinds.

The striking correlation is 0.88 for the random effects. It is huge. It is whoppingly significant at 85 standard deviations away from what might be observed randomly. And it means that unobservables that increase wages increase educational attainment.