Existing command menl has new features for fitting nonlinear mixed-effects models (NLMEMs) that may include lag, lead (forward), and difference operators. One important class of such models is the class of pharmacokinetic (PK) models and, specifically, multiple-dose PK models. menl‘s new features can also be used to fit other models, such as certain growth models and time-series nonlinear multilevel models.

Growth models based on difference equations are often used to model animal growth. For instance, Andrews (1982) used the so-called logistic-by-weight model to model the growth of small lizards. Wright et al. (2013) applied this model to study the length of brown anole lizards. The authors also extended the model to account for the between-lizard variation by including random effects.

Inspired by the above studies, we created our own fictional data on lengths of small lizards. In what follows, we will use menl to fit a random-effects logistic-by-weight model to these data.

First, let’s take a quick look at the data. We list the observations for the first two lizards. 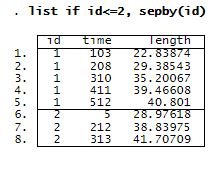 Lizards were captured and their length measured. Then, they were marked and released. After that, the lizards were recaptured at different times, and their length was recorded again. Variable time contains the number of days since the beginning of the study, and length records the length (in mm) of lizards.

where LijLij is the length of lizard jj at time ii and DijDij is the difference in days between measurements i−1i−1 and ii for lizard jj. Model parameters are lizard-specific growth rate, rjrj, and asymptotic length, aa. Here ϵij∼N(0,σ2ϵ)ϵij∼N(0,σϵ2) and rj=r0+ujrj=r0+uj and uj∼N(0,σ2r)uj∼N(0,σr2), where r0r0 is the mean growth rate, σ2rσr2 is the between-lizards variance, and σ2ϵσϵ2 is sampling error variance.

Let’s fit the above model using menl. Our menl specification is as follows.

The define() option models the lizard-specific growth rate, rjrj, as a random effect, ujuj, plus a constant, r0r0. tsorder() specifies the time variable that will be used by the L. and D. operators to create the lagged and differenced versions of the variables. Variable id in the term U[id] identifies the grouping structure of our dataset. initial() specifies the initial value for the asymptotic length.

Next, we plot the predicted growth rates. 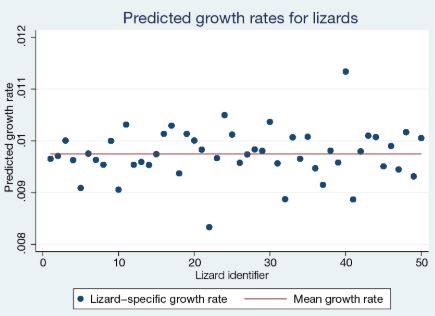 PK models concern drug absorption, distribution, metabolism, and excretion. Single-dose and multiple-dose models are of special interest. Each comes in two flavors distinguished by how long it takes the drug to enter the body: orally or intravenously. menl can fit all those models.

Let’s use menl to fit a multiple-dose model with intravenous administration. Consider a study of the neonatal PKs of phenobarbital (Grasela and Donn 1985). Each infant received one or more intravenous doses, dose (mg/kg). One to six blood serum phenobarbital concentration measurements, conc(mg/L), were obtained from each infant, subject. Other variables of interest are birthweight and a dichotomized Apgar score (fapgar), a measure of the physical condition.

A one-compartment open model with intravenous administration and first-order elimination was used to model the PKs of this phenobarbital study.

Model parameters are the clearance, CljClj (L/h), and volume of distribution, VjVj (L), for each infant jj. E(conci−1,j)E(conci−1,j) is the expected concentration at measurement time i−1i−1 for infant jj.

where u1ju1j and u2ju2j are two independent Gaussian random effects with zero means and the corresponding variances σ21σ12 and σ22σ22.

The menl specification is the following.

The explanation of the syntax follows.

Option tsorder(time) specified the variable, time, that will be used to determine the time order for the time-series operators.

Option tsinit() specifies the initial condition for the concentration at time 0.

Option tsmissing specifies that observations containing system missing values (.) in the outcome conc be retained in the computation. In this dataset, these observations represent intermittent measurements at which the dose was administered but the concentration was not measured.

We now fit the model.

After estimation, let’s use predict to predict concentrations.

The default prediction is the predicted mean function, including the estimates of subject-specific random effects. So variable yhat contains observation-specific mean concentration for each infant.

Let’s plot the predicted concentration against the observed one for, say, the first four infants. 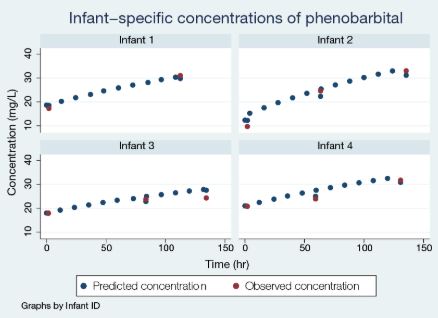 The model predicted the missing intermittent concentrations and provided the entire trajectory of the concentration for the observed measurement times.