Trend tests involve responses in ordered groups. They test whether response values tend to either increase or decrease across groups.

Trend tests are typically used when there is only a small amount of data and no covariates to control for, and a test yielding a p-value valid in small samples is desired. nptrend has an option to compute exact p-values based on Monte Carlo permutations or a full enumeration of the permutation distribution (the latter practical only for extremely small samples).

the linear-by-linear trend test, and

To calculate the Cochran–Armitage statistic for trend, you type

For the Cochran–Armitage test (when the response is 0/1), linear-by-linear trend test, and Cuzick’s test, the groups have scores as well. It tests the trend in the proportions of positive responses across the groups.

Here we have fictional data from a clinical trial of a new drug for treating migraines. The variable dose contains the dose of the drug given to a subject. The variable relief is 0/1, with 0 indicating no relief and 1 partial or total relief.

Here is a tabulation of the data: 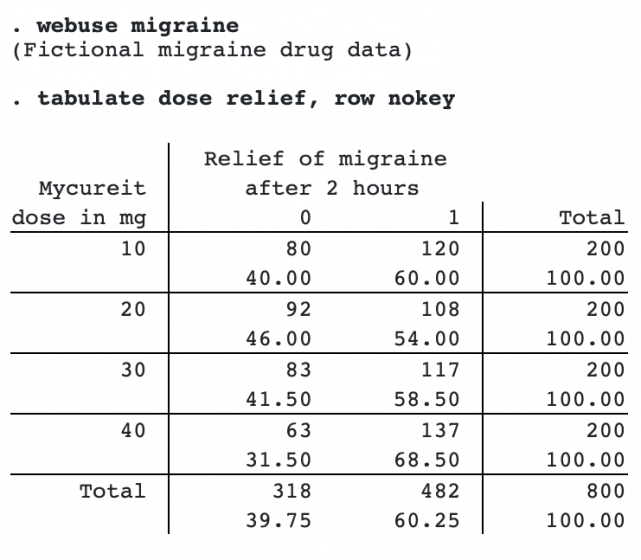 We will test whether there is a trend by dose in the proportion of subjects reporting relief. 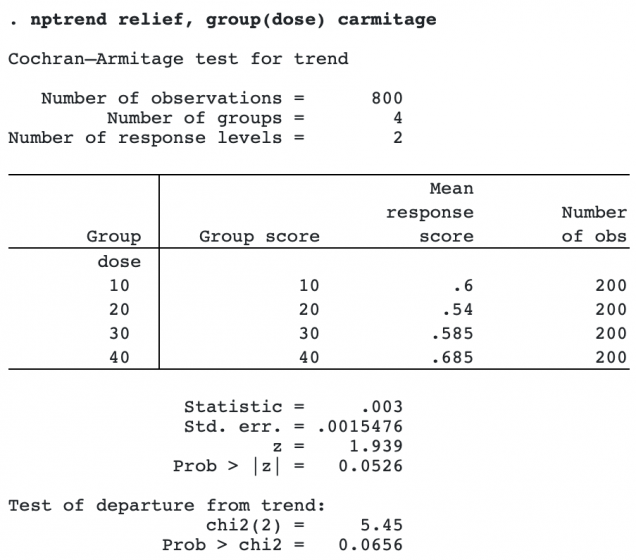 Trends other than linear can also be tested using the scoregroup() option. For this example, specifying scoregroup(1 4 9 16) would test a quadratic trend in dose.

The Cochran–Armitage test requires that responses be 0/1 or else the group indicator be 0/1. The other trend tests computed by nptrend have no restriction on the response; the response variable can have any value.

Here’s an example with the responses being ocular exposure to ultraviolet radiation for 32 pairs of sunglasses. Sunglasses are classified into 3 groups according to the amount of visible light transmitted. We list some of the data: 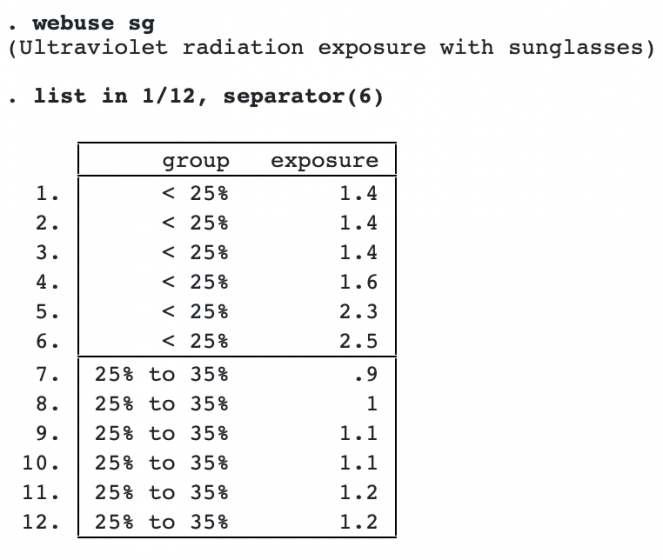 To compute the Jonckheere–Terpstra test, we specify the option jterpstra. 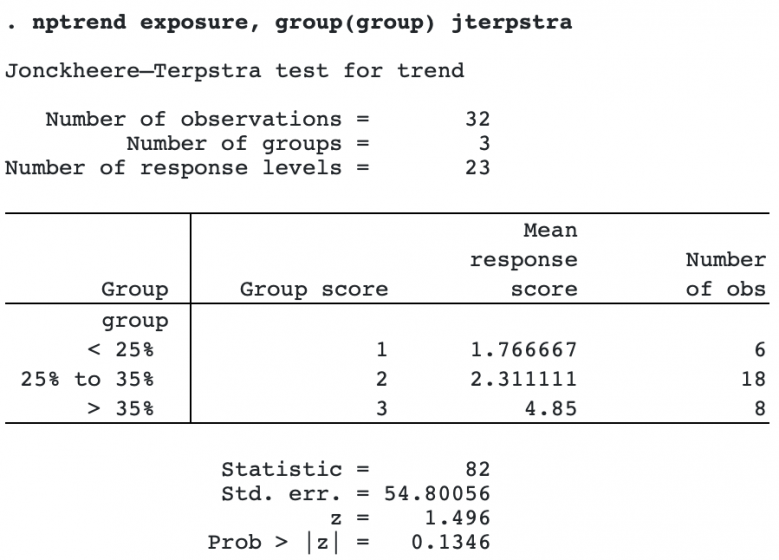 We see that the mean response score increases as the group indicator increases, but the p-value from the Jonckheere–Terpstra test is 0.1346, not reaching significance at the 0.05 level.

Because the Jonckheere–Terpstra statistic tests for any type of trend in responses across ordered groups, it will not be as powerful as a test that accurately hypothesizes the true trend. The linear-by-linear trend test allows you to do just this. The linear-by-linear trend test uses the numeric values of the responses to specify the trend being tested. How the trend is hypothesized to vary across groups is specified by the numeric values of the group variable.

To compute the linear-by-linear test, we specify the option linear. We also specify notable to suppress the display of the mean response scores by group.

The p-value from the linear-by-linear test is 0.0216, which is considerably different from the p-value computed by the Jonckheere–Terpstra test, which was 0.1346. This is not surprising because the linear-by-linear test assumes a specific trend based on numerical values, whereas the Jonckheere–Terpstra statistic tests for any trend.

The fourth trend test computed by nptrend is a test based on ranks developed by Cuzick.

In this case, it produces a p-value that is similar to the p-value from the Jonckheere–Terpstra test.

nptrend will also compute exact p-values using Monte Carlo permutations when the exact option is specified. Here we compute the exact p-value for the Jonckheere–Terpstra test.

By default, 10,000 Monte Carlo permutations are used. This gave an exact p-value of 0.1510, differently slightly from the p-value of 0.1346, computed using a normal approximation.

Monte Carlo permutations give results with random error, so for more precision, more permutations can be computed. Below, we use 100,000 permutations, and have a dot displayed every 1,000th permutation to monitor the progress. We specify a random-number seed so we can duplicate the results and the option show, which displays a detailed table of the Monte Carlo results. 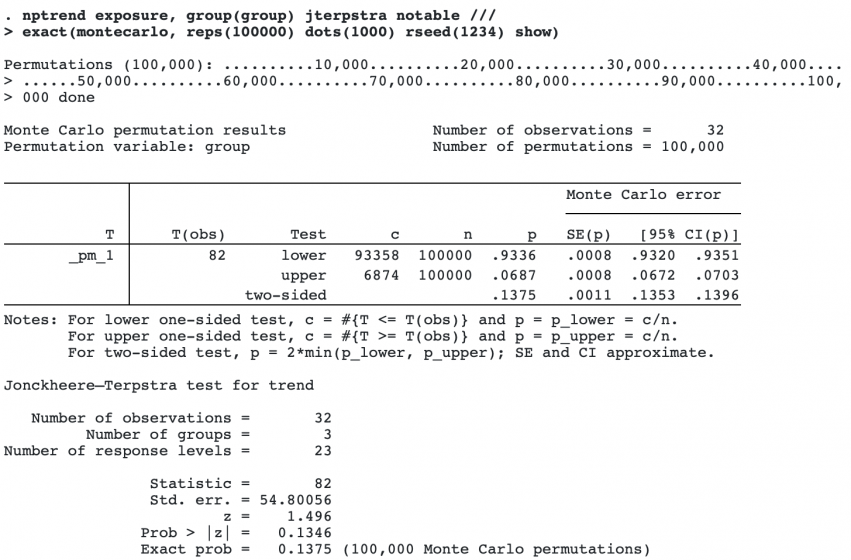 This example has only 32 observations. Should we wish to publish the results, we would likely want to run nptrend again, specifying 1,000,000 or more permutations to reduce the Monte Carlo error further. Permutations are generated using a fast algorithm, and the computation is not time-consuming.

For extremely small datasets, the exact(enumerate) option can be used to fully enumerate the permutation distribution. It gives an exact p-value without any Monte Carlo error.