Impulse–response functions (IRFs), dynamic-multiplier functions, and forecast-error variance decompositions (FEVDs) are commonly used to describe the results from multivariate time-series models such as VAR and DSGE models. These models may have many parameters, which may be difficult to interpret. IRFs and other functions combine the effect of multiple parameters into one summary (per time period). For instance, IRFs measure the effect of a shock (change) in one variable such as the inflation rate on a given outcome variable such as the unemployment rate.

In Stata 17, you can perform Bayesian IRF analysis with the new bayesirf command.

Bayesian IRFs (and other functions) are computed from the “exact” posterior distribution of IRFs, which does not rely on the assumption of asymptotic normality. They may also provide more stable estimates for small datasets because they incorporate prior information about the model parameters.

bayesirf provides several subcommands for creating, graphing, and tabulating the IRF and related functions. You can create multiple IRF results and combine them in tables and on graphs. You can even include the IRF results from classical frequentist analysis for comparison.

In Bayesian VAR models, we showed basic Bayesian IRF analysis using the U.S. macrodata, which are quarterly data from the first quarter of 1954 to the fourth quarter of 2010. Here we will show more examples of Bayesian IRF and FEVD analysis.

Here are the data. In classical analysis, an IRF (and other functions) is a single function for given response and impulse variables. In Bayesian analysis, we get an entire MCMC sample of IRFs simulated from the posterior distribution. This sample is summarized to produce a single statistic such as posterior mean IRF or posterior median IRF.

We start with creating the IRFs and other functions. We name our IRF results as birf and save them in a Stata dataset birfex.irf.

Next, we plot the IRF with fedfunds as the impulse variable. We can see the results in a table. 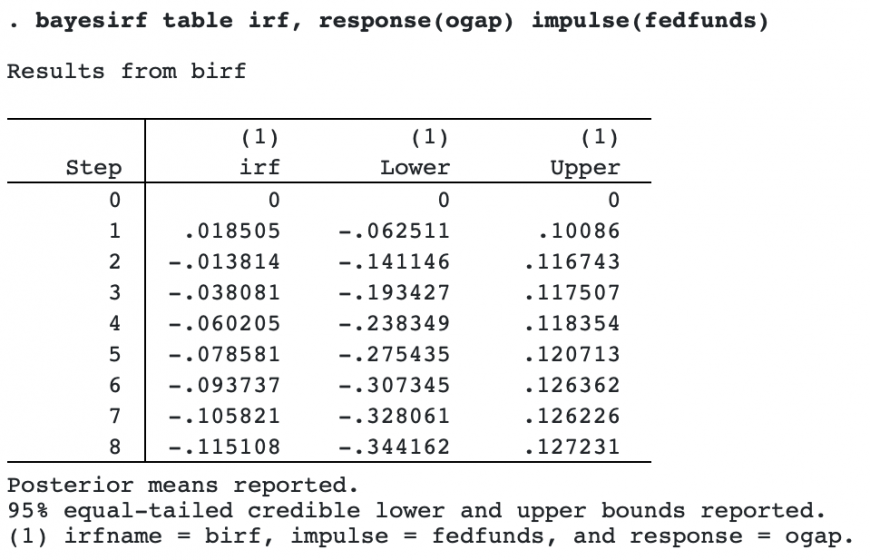 We can see the effects of a shock over a longer horizon by specifying more time periods in the step() option of bayesirf create. We replace the current results and additionally save the IRF MCMC sample in birfsim.dta. (We need IRF MCMC results if we want to compute credible intervals other than the default 95% equal-tailed intervals with bayesirf subcommands, which we demonstrate later.) We can look at other functions and plot them side by side by using bayesirf cgraph. Let’s plot orthogonal IRF and FEVD. Orthogonal IRFs (OIRFs) describe the impulse response to a one-standard-deviation shock. FEVD measures the fraction of the error variance that is explained by a shock to the federal funds rate. OIRFs support our earlier conclusions based on IRFs. FEVD shows that the shock to fedfunds is prevalent in the first step but then decreases over time.

We can also display multiple results in a table by using bayesirf ctable. For brevity, we show only the first three steps.

You can also use the clevel() option to change the default 95% credible level.

After analysis, we remove the files created by bayes: var and bayesirf create if we no longer need them.